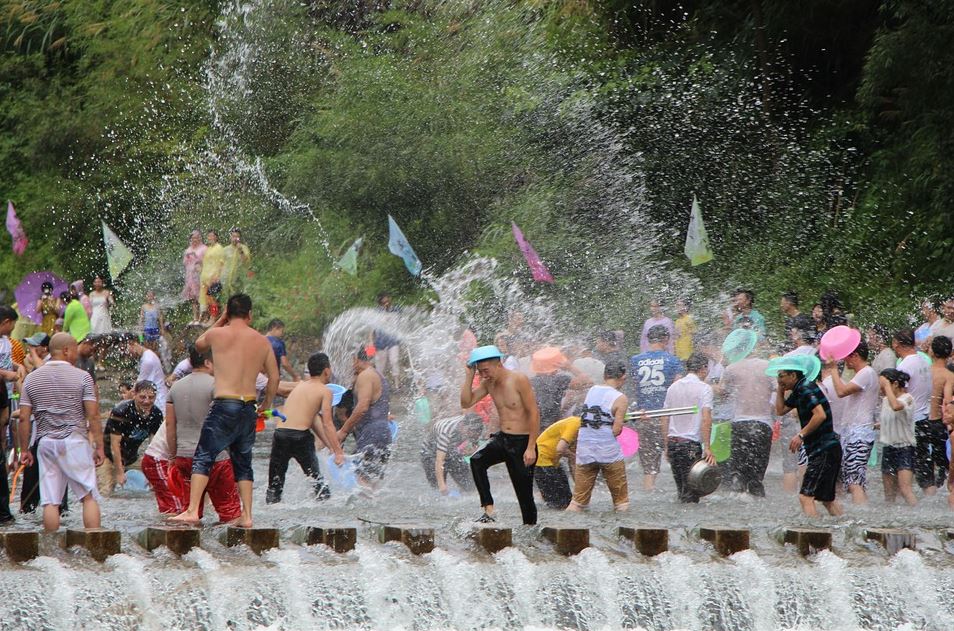 The water festival is a national holiday that celebrates Thai New Year. It is held on April 13 each year, although the holidays last for at least a week. This is a popular summer festival in Thailand where people clean their houses, pour water on Buddha statues, and soak each other to symbolize the cleansing of last year’s sins. They also pay tribute to elderly family members and their ancestors. It is celebrated nationwide, although the biggest holidays are seen in Chiang Mai, Phuket, and Bangkok. The streets are demarcated for huge parades, with dance performances and several regions crowning Miss Songkran every year. Before the water festivities, the Thai people will first visit temples to thank God for the past year and pray for good luck for the coming year.

Not the kind of vegetarian festival you can think of, the Phuket Vegetarian Festival is perhaps the strangest and most extreme summer festival in Thailand. It is also called the Nine Emperor Gods Festival or Kin Jay Festival. Some devotees demonstrate their devotion by practicing self-mutilation, such as walking on burning coals, stabbing a sword in their face, and climbing the ladder of a blade. Miraculously, most of them heal without medical care. Devotees are not allowed to consume meat during the festival, so you will find a number of vegetarian food stalls marked with yellow flags. The dishes are mostly soybean-based and resemble meat products like pork and chicken, and are the same texture. It is one of the best summer festivals in Thailand that is celebrated near the end of September and the beginning of October. Some of Phuket’s main shrines, including Jui Tui, Bang Niew, Phut Jaw, Cherng Talay, and Kathu. The festivities range between different shrines.

The exact date of the royal plowing ceremony varies from year to year as the lunar calendar determines when it is celebrated. It usually falls in April or May. An ancient royal tradition dating back more than seven hundred years, the royal plowing ceremony marks the beginning of the rice-growing period. With half of the Thai population relying on farming for their livelihood, it is no wonder that a celebration is an important event for the people and the government. The ceremony is also an opportunity to honor outstanding farmers for their agricultural innovations. Thus it is also called Farmer’s Day. During the plowing ceremony, two red and gold-covered sacred oxen are used to plow the field in front of the great palace. They circle the field nine times (because the nine are a favorable number in Thailand). The oxen are then offered seven foods, including rice, corn, green beans, sesame, grass, water, and rice wine. What they choose predicts what will be plentiful next season. The ceremony is held in Sanam Luang each year, a large open field and public square near Wat Pha Kaew and the Grand Palace in Bangkok. 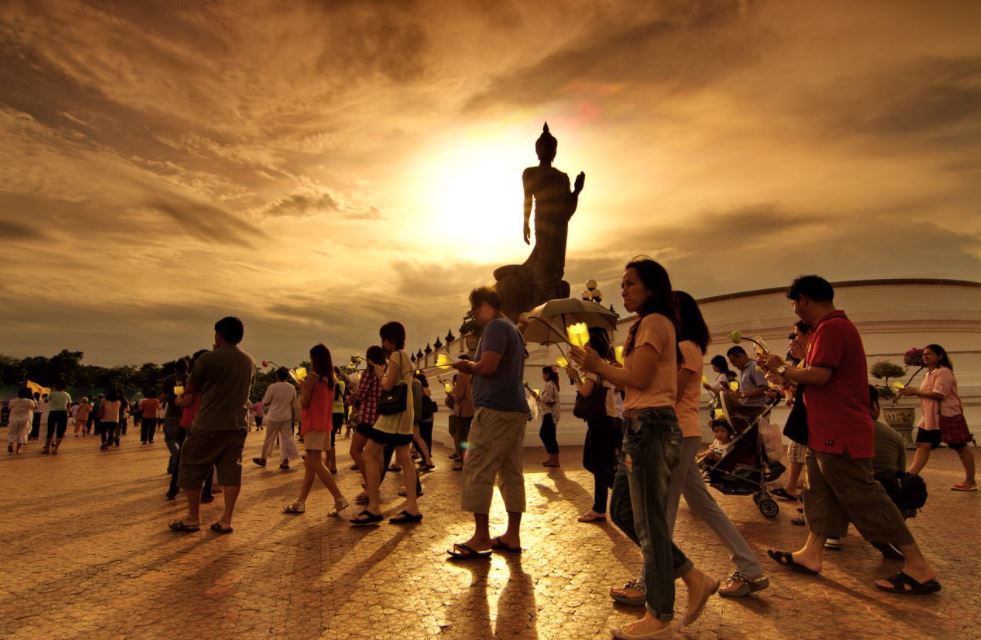 Thailand’s most important Buddhist festival commemorates the three most important events in Buddha’s life: his birth, enlightenment, and death (the attainment of nirvana) on the same day, Vesak’s full moon day. The date of Visakha Bucha is not fixed in the Gregorian calendar as the festival is set based on the lunar calendar. It mostly falls in May or June. In 2020, Visakha Buka will be held on May 6th. In Visakha Buchan, Buddhists visit local temples, make offerings, and participate in rituals such as hearing the Buddha’s teachings and meditating. Candlelight parades are held in the main churches, making it a truly peaceful and tranquil place. This most popular summer festival in Thailand is celebrated in the main temples of Bangkok, Chiang Mai, and is the epicenter of the event elsewhere. 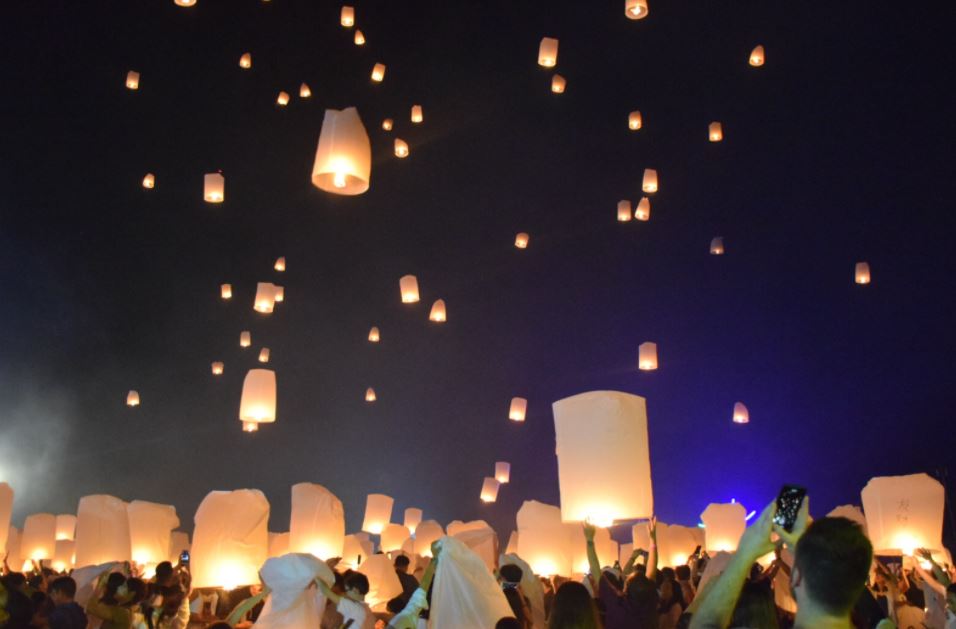 Yi Peng festivities are held in many cities in the north of Thailand, and Chiang Mai is the best city to see this fantastic festival. In Chiang Mai, he sees thousands of lanterns flying in the sky, small stripes lined with candles, and there are special parades. Major ceremonies will be held at the Three Kings Memorial, Thapae Gate, Old Town Trench Area, and the Ping River. This famous summer fest in Thailand is a festival of light that is somewhat similar to Loy Krathong and is celebrated on the same day. During the festival, thousands of paper lanterns called “khom loi” will be released into the sky. The sight is a truly incredible sight, and a photographer’s dream is to capture such moments. In addition to publishing the lanterns, the festival also includes the presentation of the lanterns, religious events, parades, fireworks, musical performances, and food. Yi Peng differs from Loy Krathong in that the lights are released into the air instead of being released into the water, and that Yi Peng is primarily celebrated in the north of Thailand, while Loy Krathong is celebrated throughout the country. Yi Peng’s biggest celebration is held in Chiang Mai, the ancient capital of the former Lanna Kingdom. Yi Peng is celebrated with Loy Krathong and the festivities last for three days. 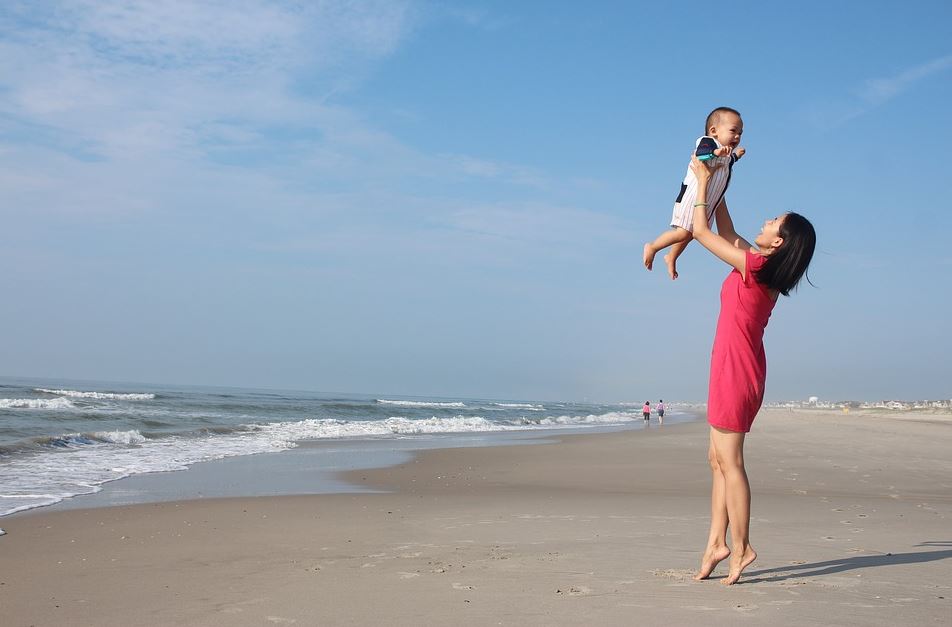 The people of Thailand are fiercely committed to the ruling ruler and mark the birthdays of their rulers as Mother’s and Father’s Day in the country. Mother’s Day is celebrated on the Queen’s birthday on August 12, while Father’s Day is celebrated on December 5th. Both days are a national holiday marked by celebrations such as parades, musical performances, traditional dining stalls, and church visits. On Mother’s Day, mothers are invited to their children’s school, where they perform songs and dances in their honor. On Father’s Day, it is customary to wear yellow or gold attire. On both days of the festival, you would see huge ornaments in the cities of Thailand, and people often put large Thai flags and portraits of the king and queen in their homes. 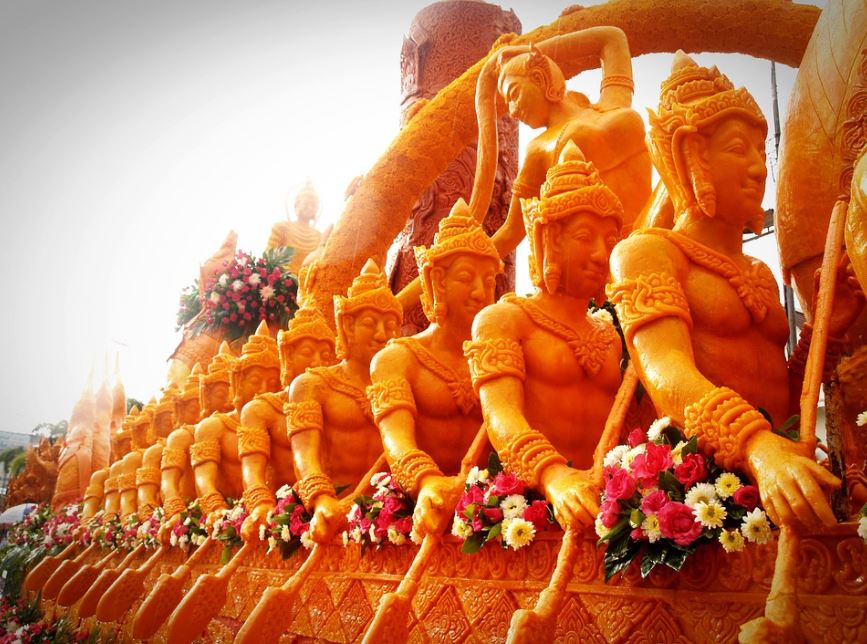 This most popular summer festival in Thailand is held in Ubon Ratchatani, southeastern Thailand. It is held in July on the days of Asanha Puja (which commemorates the Buddha’s first sermon) and Wan Khao Pansa (which symbolizes the beginning of Buddhist Lent). During the candle festival, large wax statues are made so that they can parade on huge floats. In recent years, these wax sculptures have been created under the aesthetics of traditional and modern art, while candles represent different districts of Thailand. Some intricate candles were carved with scenes from Hindu and Buddhist mythology. Normal-sized candles are placed around the temples to dispel the gloom, while customs require people to donate food and clothing to the monks. The parades include many dancers and traditional musical performances as they head towards the church premises. It is celebrated in July every year. 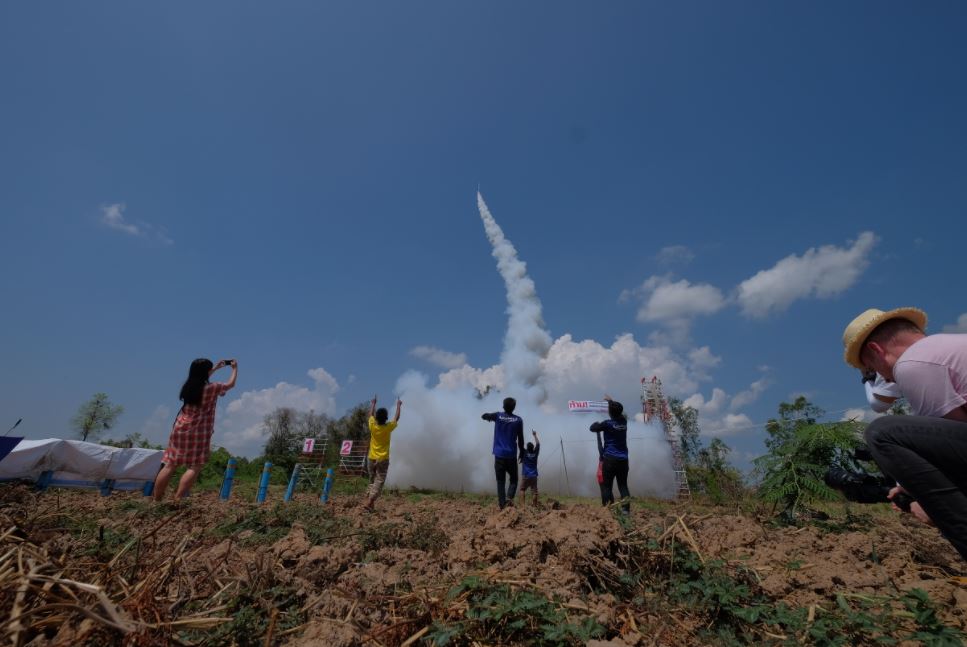 The rocket festival is held in Yasothorn province in northeastern Thailand. It is one of the most famous summer festivals in Thailand that is very popular among farmers as the rockets are designed to encourage the gods to bless them with heavy rainfall. Locals make intricate missiles that are almost 20 feet long. The rockets are first circled around the city before being released into the sky by sulfur and coal. The person whose rocket has risen the most usually wins almost 10,000 THB. People who failed to launch the rockets are playfully thrown into the mud bath as punishment. It is characterized by plenty of live folk music and merriment with the consumption of local rice wine. This famous Thai summer festival is celebrated every year in May. 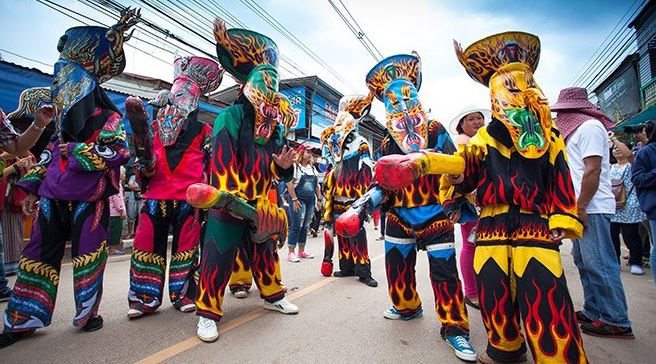 Called the “Ghost Festival” in Thailand, due to the embrace of the macabre, it takes place in the small town of Phi Ta Khon Dan Sai. It is a three-day holiday marked by colorful masks. These masks were painted in flashy, eye-catching colors, along with large phallic noses. It typically occurs on the 6th full moon of the lunar calendar, which occurs in June or July. Legend has it that Phi Ta Khon is preparing for a fun party that both the living and the dead want to attend. Locals believe that loud noises awaken the spirit of the Mun River, which protects their city. There are huge parades, beauty pageants, and musical performances on the first two days of the festival, followed by a harsher day of Buddhist ceremonies. As Dan Sai is a small town, travel can be complicated and the accommodation is quickly filled, so it is advisable to book in advance.

Hope you enjoyed the brief list of the top 5 summer festivals in Thailand that offer umpteen beach sports and fabulous scenic views of the city. There are various famous spots at the mentioned Festivals of All Seasons Celebrated in Thailand which delivers many attractions. For more engaging blogs like these head on to our other blogs and ping us in the comment sections below if you hold any queries regarding the travel destinations.