The 400 million-year-old limestone caves also called Batu Caves is one of the most sacred Hindu locations in the world outside of India. These caves are the most sacred Hindu location in Kuala Lumpur as well in Malaysia. The 42.7 meters high statue of Lord Murugan is the main attraction at the limestone caves which was a Hindu deity.  At the Sri Mariamman Temple in KL city center, the statue is the endpoint of the procession. At festival time, over a million pilgrims gather here and celebrate it with full joy. There are some beautiful Hindu shrines within the largest of the chambers of the Batu Caves, the Cathedral Cave, which can only be reached after climbing 272 steep steps. In the Ramayana Cave, you’ll find paintings depicting the epic story of Lord Rama. The Batu Caves in Malaysia are very popular due to several reasons. Apart from being some of the oldest limestone caves in the world, they are also hosting to some of the most sacred religious monuments in Malaysia. You can buy tickets for Batu Caves online from our ticket booking section so that you don’t waste your time in long queues. With other touring options in and around Kuala Lumpur apart from buying tickets for Batu Caves you can also check Batu Caves ticket prices beforehand and even combine Batu Caves tickets. Istana Negara is considered as the favorite tourist spot where they welcome you with arch guards also known as National Palace in Kuala Lumpur. By architect from Jabatan Kerja Raya (JKR) Malaysia, this beautiful monument in Kuala Lumpur was reconstructed and it took 4 months to complete the renovations and it, however, did not affect the main structure of the building. In a way, it is like a melange of contemporary and historical Malaysia. Certainly worth seeing, this impressive palace is colored with white and gold. This very pretty building is a rather underrated but very interesting sight in Kuala Lumpur Historically and architecturally significant, this 1909 mosque served as the city’s main Islamic center of prayer before the construction of the National Mosque in 1965. Moorish, Indo-Saracenic or Mughal influences are clearly seen in its architectural style. At the conjunction of the rivers, located at the confluence of two rivers adds to the mosque’s beauty. Highlights of this popular monument in Kuala Lumpur include three domes around the prayer hall, and red and white minarets 88 feet high and the cupolas on the minarets, called ‘chattris’ (umbrellas). The man who sculpted the famous Iwo Jima monument in Washington DC, USA, sculpted this gigantic bronze monument. In 1966, it was Felix de Wheldon, who made for Malaysia this symbol representing the sacrifices made in the name of peace and freedom. The seven human figures on top each denote one particular noble attribute – courage, leadership, sacrifice, strength, suffering, unity and vigilance. It’s also meant to commemorate the struggle between the Commonwealth Armed Forces and the communist forces of the Malayan National Liberation Army. You don’t immediately see this old monument in Kuala Lumpur on arrival. Whereas a smaller monument describes relevant history and information, a wide stairway will first lead you up the hill 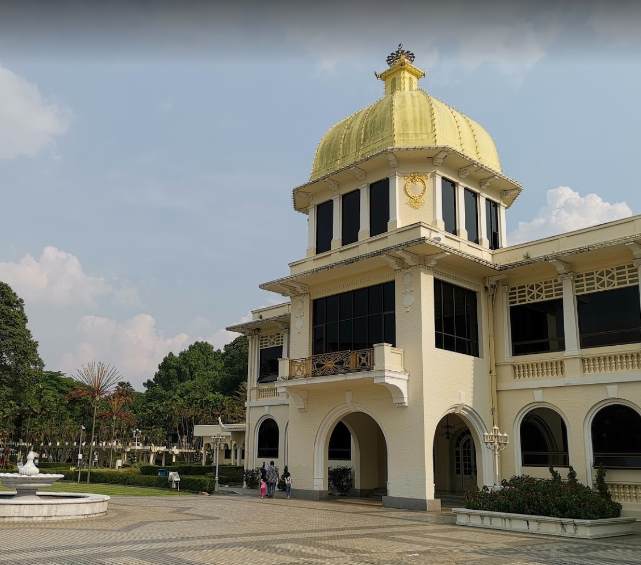 This former home of Malaysia’s Yang di-PertuanAgong (Supreme King) has now been converted into a Royal Museum. Most of the 11-hectare grounds and the building itself are worth visiting, though you’re only allowed access to about two floors. This most famous monument in Kuala Lumpur has a nice history. Built as the home of a wealthy Chinese miner in 1928, it became a Japanese Officer’s mess during WWII. In 1957, the state acquired it and it became a royal palace. The rooms are lavishly made, but the actual furnishings aren’t so grand. They do have an interesting mix of European and Malaysian tastes. It’s thought that the nicer furniture has been taken away to the new palace. Before Sentral, this glass and iron building, built-in 1910, used to be the railway hub of Kuala Lumpur. The beautiful building’s architecture is very unlike what you get around the rest of the city – a mix of Eastern, Western and Moorish. Inside, the décor and look is very Victorian. The facade alone is worth visiting the building for and it makes the building one of the most photographed in the city. There’s a mini-railway museum inside and it has a strange exhibit: the bone of an elephant mother that died trying to ram a train for killing her calf. If you feel like staying over, there’s a Heritage Station Hotel on the building’s first floor. Today, though, most of the building is used as the fire-response services.This heritage monument in Kuala Lumpur also serves as the central point of Kuala Lumpur. Right across the street is the KTM building, once known as the Malayan Railways Limited Building. However, as it is in official use and not a tourist destination, you may only click photographs from outside, but not step in Especially around Kuala Lumpur, traditional Malay style houses are rare enough today and that it’s worth preserving the ones we do have. Penghulu Abu Seman bin Nayan of Kedah belongs to this house and he was the one who is also the headman of it.  The house passed to his son after his death who in turn passed on without leaving a clear heir. Via the guided tour, this grand wooden stilt house and one of the most beautiful monuments in Kuala Lumpur is best visited today and you’ll be given  a bottle of water, a bug spray, and a fan for your ticket price. The guides are very knowledgeable and will answer almost any question you put to them. Under the house, you can check out the grand, hand-carved canoe. In 1864, Kapitan Yap Ah Loy founded the temple. The two deities named Sin SzeYa and Si SzeYa, dedicated it to whom he attributes his successful defense of Kuala Lumpur. It’s the oldest Taoist temple in the city and a serene place counted in one of the religious monuments in Kuala Lumpur. It is said that if you circle the main altar thrice, you’ll be blessed with good fortune. At the temple, praying to the God of Education, Wenchang DijunIt’s not uncommon to find students for good luck in their exams. You can have your fortune told at the temple for a fee of RM1, all you have to do is rattle a container containing a fortune stick with a number on it, and bring it to the monk. Chinese New Year is the best time to visit the temple. Over 100 years old, the sedan chairs are at the temple entrance Back at the turn of the 20th century when the Chan Clan was immigrating into Kuala Lumpur, this temple to serve as their community support was established in 1906. Famous for the intricate carvings of legendary Chinese figures on the kwang-tung roof, now it’s one of the oldest Chinese temples in the city. This cultural monument in Kuala Lumpur also has pretty terracotta friezes with a male statue and a female statue guard the main entrance and with battle scenes, the pillars inside are painted. Check out the Blue ceramic pottery lines on the edges and the green tiles on the roof. As the clan house of the Chan, Chen and Tan families, the temple is today recognized as having centuries-old ancestral ties. During the British era, the Sultan Abdul Samad Building first housed all the government offices.  It is also known as Bangunan Sultan Abdul Samad built in the late 19th century. Today, this iconic monument in Kuala Lumpur houses the Ministry of Information, Communications, and Culture. Against all the surrounding buildings, the 41-meter tall clock tower stands out tall and being 95 meters tall, the flagpole outside the building is the tallest in the world