Unusual and Bizarre Food in Saudi Arabia That People Eat

Although many unusual Saudi Arabian foods have gained immense popularity throughout the world, many people’s experience of the region’s food remains limited to a standard, Westernized menu. However, for those who wish to branch out from a diet of kebabs, hummus, and falafel, Saudi Arabian cuisine offers a range of delicious and unusual dishes, each reflecting the diversity of the region. We check out the 10 most bizzare foods in Saudi Arabia you may not have heard of. People of Saudi Arabia claim that camel meat tastes like coarse beef, if taken from older camels it can prove to be very tough and less flavorful. You will find many places in Suadi Arabia where you even get camel burgers. This unusual food to eat in Saudi Arabia is plentiful in the Middle East, particularly in the Gulf area, where camels are reared for their meat and leather. Camel meat is considered a luxury item and is rarer and more expensive in the larger urban areas, yet in more rural areas, camel meat is considered an everyday staple. The meat is cooked in a variety of ways; barbecued directly over hot coals, skewered over open flames to create juicy, tender shish kebabs, or even ground and turned into gourmet burgers. The hump of the camel is particularly prized for its high-fat content and flavorsome meat, but depending on the cut, a camel can range from tough and gamey to sweet and juicy. Kabsa is a variety of mixed rice dishes common in Saudi Arabia as well as in Jordan. Though it’s considered the national dish of Saudi Arabia. (lamb kabsa, chicken kabsa, beef kabsa) are the most common but life in the desert is no easy task. Early Bedouins were forced to use locusts as a protein replacement. Though this unusual food in Saudi Arabia was understandable in the past it’s still a delicacy to this day usually Bedouin and southern Saudis in the Jazan area consume it. It’s believed that locusts are full of nutrition and you know like every disgusting food enhances male sexuality. Locusts are caught in the spring season immigrating from the depths of Africa to the Arabian peninsula reaching Saudi Arabia, Jordan, and Palestine. Then there is a massive gathering of hunters using nets to catch the locusts. After that they are sold in the locust market and are very pricey costing about 300 Saudi riyals per kilogram so there you have it as your delicious Viagra replacement. Often considered Egypt’s national dish, kushari dates back to the 19th century but is most popular in Saudi Arabia. At this time, Saudi Arabia was experiencing a period of multiculturalism and economic affluence, to such an extent that kitchens became filled with a variety of different products, including pasta, rice, chickpeas, tomato sauce, and lentils. All the leftover ingredients would be combined into one big dish at the end of the week, which came to be known as kushari. Today, this strange dish in Saudi Arabia is a favorite among locals and has become a popular street food, with the pasta, rice, and pulses served mixed together in a bowl and topped with a spicy, vinegary tomato sauce. 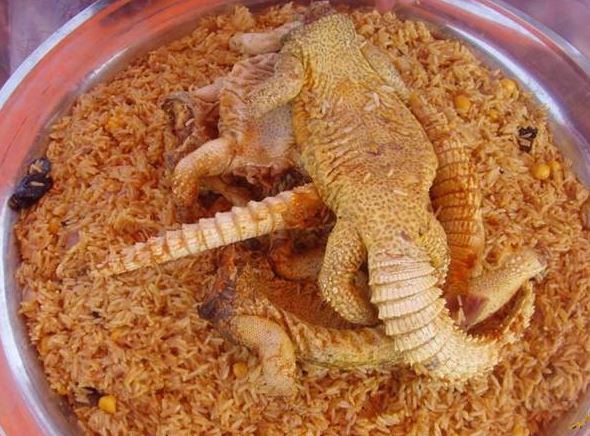 The Uromastyx is a genus of African and Asian lizards. The desert is its home and there are plenty in the Saudi desert. The animal is known for its amazing survival skills. But it’s quite unfortunate in Saudi Arabia as Bedouin hunters love it. They hunt it in massive numbers and use some vile ways to hunt it like drowning the animal in its pit or killing it by fire. The animal is currently facing extension and concerns are rising. This strange food from Saudi Arabia is much more common and loved by Saudi people, not just the Bedouins but also civilized city people. It’s prepared by cutting the animal into pieces and stewing it along with tomatoes, onions, dried lemon and is served with basmati rice. Its price is somewhat more reasonable compared to locusts. they are usually captured and prepared by campers who go camping in the desert (something of custom to the Saudi people)after the kabsa is consumed. The campers enjoy some spicy  Arabian coffee. Fesikh is a traditional Arabia dish consisting of fermented salted and dried fish its origins can be traced back to the ancient Egyptians as it was found in many Egyptian tombs sealed within jars. It’s believed that it was consumed in the (sham al nesim festival) and the Arabians are still keeping this tradition today because fesikh is fermented it has an awful offensive rotten fish smell and it can make any person puke just by a simple whiff of it. Fasakhani is the person who prepares it and the profession is quite elaborate, passing from father to son in certain families making it hard for health organizations to observe. Every year around sham el nsim festival cases of poisoning are reported involving incorrectly prepared this weird food of Saudi Arabia. Its symptoms are dangerous including nausea, vomiting, and abdominal cramps, constipation, and even death. Another unusual dish in Saudi Arabia, kashk-e bademjan is an essential item at gatherings and parties, served as a dip alongside warm flatbread. This very rare cuisine has two main ingredients; bademjan, or aubergines, which are fried until very soft and mixed with kashk. Kashk is a fermented dairy by-product with a sharp, distinctive taste and yogurt-like consistency. Mumbar is the intestine of the animal (usually cows, sheep, and goats). They are very common in the Arab world, especially in Saudi Arabia as it’s considered one of the traditional dishes of Arabia cuisine. The intestines go through a long process of cleaning to remove the foul smell then they are stuffed with a mixture of rice, tomatoes, parsley, and onions . after that they are boiled before being fried and are usually served with moloukia (a popular soup made of jute leaves). This most unusual food in Saudi Arabia usually consumed during the Muslim (Eid al Adha – Eid of sacrifice) when Muslims sacrifice animals honoring the sacrifice made by the prophet Abraham.

Get: Famous Foods in Sydney Considered a norm for many cultures but still bizarre for most people. They are very common in the middle east and are considered a  delicacy too. Almost every bit of the head is consumed (tongue, eyes, brains even the ears). Low-income families find salvation in it as it’s cheap and considered a good source of protein. There are special restaurants that only serve the head named (masmat) in Egypt and (mkkadem) in Saudi Arabia offering (sheep, goat, cow, buffalo) head cooked in different ways. It is said that this bizarre food in Saudi Arabia is full of nutrition like the brains are believed to boost intelligence. No, it’s not oysters this is actually the snails you used to see in cartoons as a kid. It’s considered a delicacy In Moroccan and African cuisine. As the dish is native to Africa but it’s loved and consumed by Saudi Arabian people as well. This one of the strangest foods of Saudi Arabia usually served as a spicy soup as morrcan dishes are normally very spicy. Consisting of (snails, tomatoes, parsley, and mushrooms). Special restaurants prepare them usually near the coastal part of morocco. A very common and popular dish in the Middle East prepared in different ways (usually stew). Consumed in (Saudi Arabia, Egypt, Syria, and Jordan). Usually, this unique dish in Saudi Arabia is consumed by low-income families because of its cheap price and as a protein source. Since meat is expensive especially in Egypt. It is also believed that testicles have a high nutrition value and boost men’s sexual performance. It’s usually prepared by stewing the testicles with (tomatoes, onions, garlic, bell peppers, and lemon). Eating testicles is considered a manly thing in Saudi Arabia so if you happen to visit Saudi Arab and someone offers you some you better do or else you will not look so manly.

So far we have discussed the unusual foods in Saudi Arabia, which contains the proper information regarding all the famous strange foods in Saudi Arabia. I hope you might have loved reading this article and if you love to know more about Saudi Arabia then kindly head to our other articles as well which will help you to get knowledge about.