Namibia is definitely a novel place to be and a remarkable sight to see. With a trove of deep-rooted traditions and celebrated cultures, a visit to the monuments in Namibia departs from the humdrum sightseeing tours to bring you an enriching experience of scenic colonial buildings. Windhoek is Namibia’s capital city, the country’s most populous city, and the most important commercial center and continues to flourish more than ever. Surrender yourself to the infectious energy of the locals, coated in the beautiful tongue of the Namibian language, as you embark on this journey. Here is one of the top 10 monuments in Namibia: 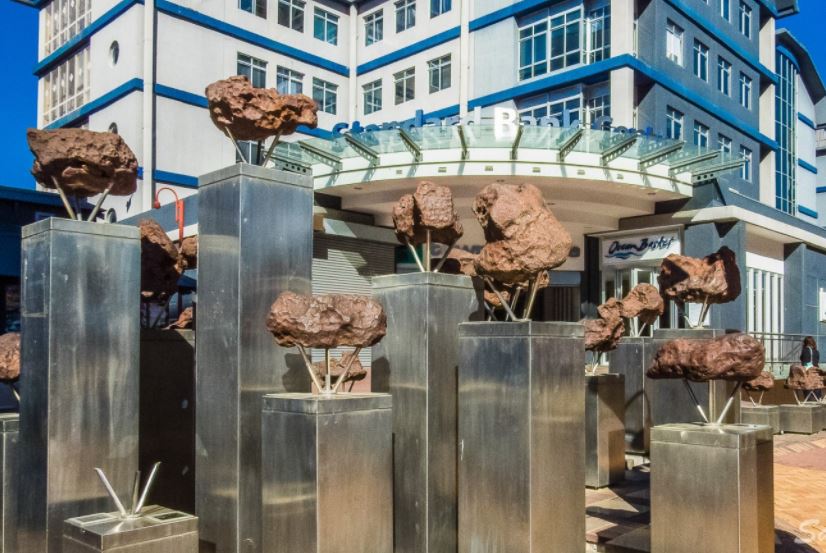 Post Street Mall forms the very heart of the shopping scene in Windhoek, with its easterly side being where you can find the Gibeon Meteorite National Monument. This ancient monument in Namibia is made up of some 33 octahedrite meteorites mounted on numerous steel plinths – in total the structure weighs in at 21 tonnes. The meteorites are believed to be around 600 million years old. In 1838, their discovery was first recorded, but it wasn’t until 70 years later that they were collected for display. The meteorites come from a meteorite shower that fell over southern Namibia, thought to be the largest such event anywhere in the world. The Franke Tower is the memoirs of the German military captain Erich Victor Carl August Franke, who attacked Omaruru following a 900-km march in 1904. Franke led forces to suppress an uprising by the Herero forces and was victorious in his mission, receiving German military honors for his actions. Now a national monument in Namibia offers superb views across the townscape but once erected by Omaruru’s German people. The Independence Memorial is a large building with an imposing statue of Sam Nujoma (Namibia’s first president) in front of it. The historical building in Namibia presents a summary of the history of Namibia, focusing mostly on the struggle for independence. For someone new to the subject, the information is very interesting and a good learning opportunity. Another nice aspect of the building is the glass elevator on the side which provides an impressive view over Windhoek. You can plan about 1, a maximum of 2 hours for visiting it. It’s free entrance. Should you want to enjoy a meal with a view after your visit, there’s a restaurant on the last floor of the building. Heroes Acre is located just a short distance from Windhoek, at the foot of the Auas Mountains. This one of the important monuments in Namibia, with its marble obelisk and statue of an unknown soldier, was inaugurated in 2002 by the then state president, Sam Nujoma. Intended as a national symbol and to stand as a memorial to those who gave their lives during the fight for Namibia’s independence, Heroes Acre is home to the tombs of 174 Namibian heroes. The National Marine Aquarium of Namibia is placed close to the coast. If you’ve been to other aquariums, you might not be very impressed. Yet, this is the only aquarium in Namibia, so it is special for locals. The highlight, especially for kids, is the glass tunnel built under the tank. Visiting this important landmark in Namibia is for sure an activity you should consider if you’re traveling with your family. Although small, they provide good extensive information on the species on display. You should plan for about an hour for the visit. Hoba is one of the biggest meteorites in the world, thought to have collided with Earth roughly 80,000 years ago and was discovered in 1920. The statistics are impressive. Whilst over-enthusiastic souvenir hunters have reduced the meteorite’s dimensions somewhat, it still measures a sizable 3 meters / 10 feet in length and weighs around 60 tonnes. This one of the oldest monuments in Namibia is thought to have ‘bounced’ along the ground to its eventual resting place, explaining perhaps why there’s no vast impact crater as such. Today, the rock is counted in one of the famous monuments of Namibia. As such, it rests very neatly in its own specially made amphitheater.

Swakopmund Museum is located right next to the beach, so when you’re getting bored of the beach, you can just head into the museum. It’s the perfect place to learn more about Namibia’s history and ethnology. Even if it’s rather small, it also provides information about wildlife that exists in the area. However, since it is not a modern interactive museum, it might not be very interesting for children, even if you might find the information very useful. You can plan for around one hour for the visit to this beautiful monument in Namibia. Spitzkoppe is located above the desert plain between Windhoek and Swakopmund. This series of huge granite peaks has become popular with rock climbers, earning itself the nickname of ‘Namibia’s Matterhorn’ at its highest point of  5,905 feet. The mountain’s highest peak was first reached in 1946 according to records, and today it is accessible to experienced climbers during the winter months. This famous historical landmark in Namibia attracts hikers across the world who can admire the fascinating flora that grows in this area. A few good examples still remain at the base of Great Spitzkoppe whilst many of the bushman paintings around Spitzkoppe have been destroyed. This unusual Lutheran Church is the most famous landmark in Windhoek. Sometimes it is even used as a symbol for the city. Initially, this monument of Namibia was named “Church of Peace” as it was finished in 1910 after the war between Germans and some of the local tribes was finished. Namibia Craft Center is a venue that supports and hosts many Namibian enterprises focused on arts and crafts. This is the place to buy local souvenirs from all parts of Namibia. Omba Gallery displays a collection of paintings by both local and international artists. It is one of the most popular galleries in Windhoek. Inhabited for over 3,000 years, the valley of Twyfelfontein is located in the north-west of Namibia. Preserved as one of the largest displays of rock art in Africa evidence of these prehistoric folk can still be seen today. In 2007, the collection of 2,500 rock engravings became a UNESCO World Heritage Site and a popular monument in Namibia. The paintings were first discovered when the area was being mapped in the early 1920s. However, it wasn’t until the 1940s that the paintings could be examined more clearly. The rock works of art were more scientifically identified in 1950. Following damage to the paintings, unsupervised hiking in the vicinity is no longer allowed. An information center, with toilets and a viewing platform, has been set up. A state-owned institution, National Gallery of Namibia is aiming at promoting local visual and cultural arts. They have on-going collections, but they also sometimes organize temporary exhibitions. They are also involved in a number of art projects. If you love art, you will enjoy here in this cultural monument in Namibia learning more about the style and technique used by local artists. It’s a friendly crowd, open to feedback and new ideas. Being located approximately 60 km to the north of Grootfontein, Tree 1063 is a particularly fine specimen. There’s no doubt that Namibia hosts many baobab trees. This giant baobab boasts a trunk with a circumference of just under 66 feet, while its branches stretch for more than 39 feet. If you happen to be passing through the Grootfontein area, this historical place in Namibia is worth heading to Keibeb Farm to take a look. This is one of the oldest buildings in Namibia. Its initial purpose was to accommodate the German military force during colonial times. The building was finished in 1915. After South Africa conquered Windhoek, the building became headquarters for South African soldiers. Nowadays, the building serves as a museum, hosting the National Museum of Namibia.

So far we have discussed the best monuments in Namibia, which contains the proper information regarding all the most visited monuments in Namibia. I hope you might have loved reading this article and if you love to know more about Namibia then kindly head to our other articles as well which will help you to get knowledge about.