Here are some Palatine Hill facts. It would be easy for you to discover Palatine Hill’s history. The Palatine is Rome’s seven hills and has played an important role in the city’s history, starting from the days of its foundation. Before visiting Rome you should know these interesting facts about Palatine Hill which will create interest to explore more about the Eternal City ie Rome.

Interesting Facts about the Palatine Hill


1. “Palatine” is an origin of the word “palace”. As well as “palace” in English, “palazzo” in Italian, and “Palais” in French is also derived from the  “Palatine”.

2. Palatine Hill facts let you know that legend said that the Palatine was once home to a fire-breathing giant called Caucus. An area not far from the Hut of Romulus is known as “the steps of Caucus”. Caucus was a fire-breathing man-eater who lived in a cave on the Palatine, and who regularly terrorized the residents of the neighboring Aventine Hill until he was defeated by Hercules.

3. Romulus and Remus who were the legendary founders of Rome lived in a cave on the Palatine. They were believed to live in a cave known as the Lupercal, where they were protected by the she-wolf who later on became the symbol of Rome.

4. Romulus is believed to live in an iron-age hut on the Palatine. The Casa Romuli was a simple, one-room hut dating back to the 8th century BC, situated on the south-western corner of the hill, and although it was repeatedly damaged by fires, it was always respected by the Romans and carefully restored. The foundations of the hut are still visible and can be seen on a tour of the Palatine.

5. The emperor Augustus was born on Palatine.  In 63 BC Gaius Octavius – later Augustus – was born in a house on the Palatine. By this period the Palatine was inhabited by several wealthy families, including the rich horseman family of the future emperor. 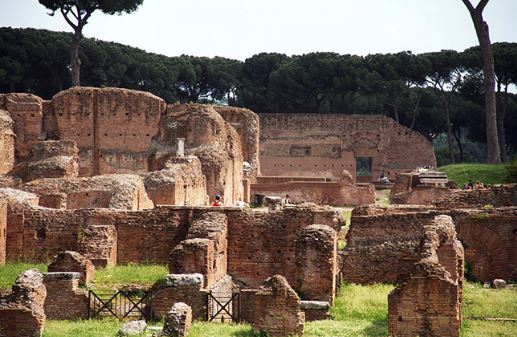 7. Palatine Hill history fact tells you that once there was an enormous temple dedicated to the god Apollo. During the construction of the House of Augustus, a lightning bolt struck to the interior of the villa. Viewing this as a prophet, he decided to build the Temple of Apollo Palatinus. This grand temple, was directly connected to the House of Augustus, had a gleaming facade and a rooftop lined with statues. Unfortunately, unlike the well-preserved villa, nothing is left of the temple.

8. Caligula was murdered on the Palatine. The Praetorian Guards and senators conspired to have the emperor murder. Caligula was only 28 when he was attacked in the Cryptoporticus under the imperial palaces on the Palatine. One source claims that he was deadened 30 times and his loyal Germanic guard responded by going on a murderous rampage.


9. The first botanical gardens in Europe were built on the Palatine. In 1550, the wealthy cardinal Alessandro Farnese bought a section of the Palatine and as well as converting part of the ruins of a Roman palace into a summer home, he constructed some beautiful botanical gardens, containing a nymphaeum, paintings, sculptures, and an aviary. The gardens fell into disuse, but some parts still remain there and can be visited on a Palatine tour.

10. The Palatine offers a nice view of Rome. In fact, it’s the only place in the center of Rome from where you can have the breathtaking views of the Circus Maximus, the Colosseum and the Roman Forum in its entirety.